Library has two additions. DVD by Michael Hosaluk and book on Salt/Pepper Shakers.

Harry Pye announced that Meals on Wheels has asked for donations for their auction on November 2. Please bring your turnings to the September meeting.

October 13 will be Liam O’Neil:

President Bill Schlief announced next president’s challenge will be a spindle turning. Use those skew chisels!

Joan Lech won the bowl donated by Rick Bryant. Now Joan will bring one of her bowls to the next meeting for the raffle.

Rick Bryant made the perpetual turning won by Joan Lech 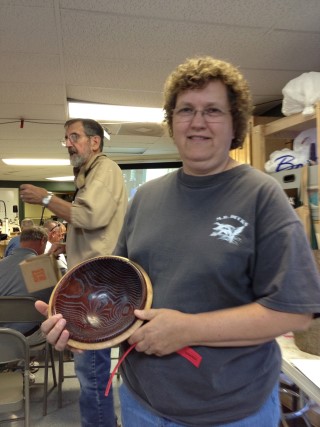